The Story of Brewer's Dictionary of Phrase and Fable

​As you may know, I’m a little bit obsessed with Brewer’s Dictionary of Phrase and Fable. I came across an old copy of the 2nd edition, first published in 1894, in the Reference section of my local Library. Whenever I get a chance, I pop into the Library because I made a vow to read the whole thing; this will take a long time because it’s a huge book. As the Reverend E Cobham Brewer, the man who devised and wrote the first two versions of the book, explains in the Preface to the 1894 publication, this 2nd edition is ‘New and Enlarged’; it certainly is enlarged. Luckily, it is utterly fascinating.
Here is Reverend Brewer’s handwritten Preface to the 1894 edition: 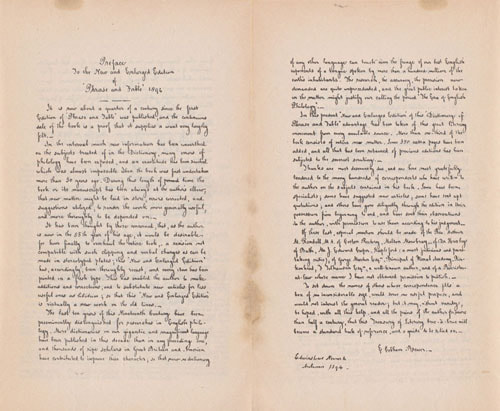 ​As you can see, his handwriting is a little spidery; you can read a typed up copy of the Preface here.
In his Preface, Cobham Brewer, who was in ‘the 85th year of his age’ when he wrote it, describes the work that had gone into the new and enlarged edition. He has been assisted by the publication of new dictionaries of the English language and lots of people have written to him offering help, advice and corrections to errors. Some of these people – the ones who “have gone through the [first] edition in their possession from beginning to end” – the Reverend names with their permission.
Notwithstanding the help of others, the majority of the work involved in putting together the new dictionary had clearly been Brewer’s. As he wrote, “During this length of time [between the publication of the 1st edition in 1870 and the 2nd edition] the book or its manuscript has been always at the author’s elbow, that new matter might be laid in store, errors corrected, and suggestions utilized, to render the book more generally useful and more thoroughly to be depended on.”
The Reverend E Cobham Brewer was born in Norwich in 1810. Following graduation from Cambridge University, where he had studied Law, in 1836, he was ordained – hence the Reverend – in 1838. Following this, he returned to Norwich and taught in his father’s school. It was also at this time that Cobham Brewer began writing scientific and educational books for younger and older readers. Some sources suggest that Brewer began work on his masterpiece dictionary in 1856 following travels on the continent. However, Cobham Brewer himself, in the above Preface written in 1894, wrote that the book had first been ‘undertaken more than 50 years ago’ which would put the date at which he began the work in the early 1840s.
In his later years, E Cobham Brewer spoke about how he gathered the material for his books: “My method is very simple. I always read with paper and pencil at my side and jot down whatever I think may be useful to me and the jottings I keep sorted in different lockers. This has been a lifelong habit with me and compiling them into a volume consists chiefly in the selecting, sorting, explaining, correcting and bringing down to date. My literary references are all contained in these pigeonholes behind me, each letter having its own bundle of slips in their turn all running in alphabetical order.”
Certainly, Cobham Brewer dated the beginnings of his dictionary to a time immediately after the publication of A Guide to Scientific Knowledge of Things Familiar around (circa 1840). As he wrote, “The popularity of this book brought me in a large number of questions on all imaginary matters. I kept these questions and answers till they grew into a large book, when I sorted them and made the nucleus of The Dictionary of Phrase and Fable.”
Here is a picture of E Cobham Brewer: 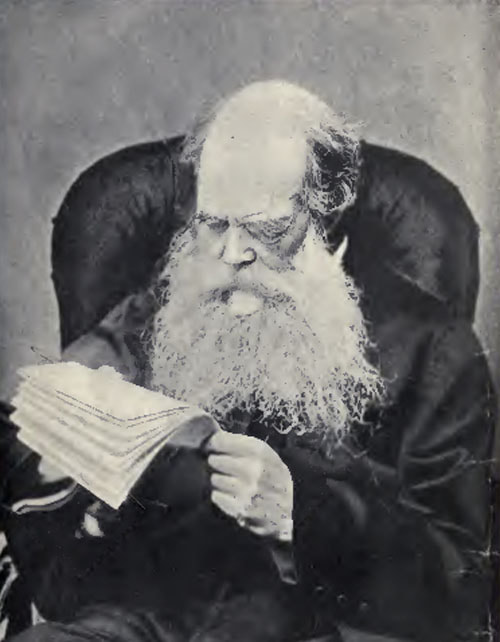 ​The ‘E’ in his name stands for Ebenezer. He looks like an Ebenezer, don’t you think? Not that I know anyone called Ebenezer – nobody at St Chad’s Middle School is called Ebenezer, anyway. The only other person I've heard of called Ebenezer is Ebenezer Scrooge from A Christmas Carol. But the Reverend Ebenezer Cobham Brewer doesn’t look like a Scrooge. He looks kindly and thoughtful, and apparently he was. As his grandson, Captain P M C Hayman, explained, “He had a wonderful way with children and would put aside whatever he was doing to amuse the children of the house before they went to bed… it was his sense of humour, which he could adapt to the childish mind, which made Dr Brewer in his old age such a very delightful companion to the youngest of his grandchildren.”
So what is Brewer’s Dictionary of Phrase and Fable? That is a very good question; it’s also a difficult question to answer. It’s certainly a dictionary. In the first section, all the entries start with ‘A’ and in the last section they all start with ‘Z’. The best way I can think to define it is to say that the book is full of random facts, phrases and fables. All the entries are interesting and, in the Library’s 1894 edition, a lot of them leave me puzzled as to what they mean. Take this for instance:
​I understand the main definition fully. There was (is?) a long-eared Scandinavian tribe called Fane’sil. That bit’s fine. But what is Pliny? I turn to the entry for ‘Pliny’; here is what it says:
​Hmmm. That doesn’t help. I do as instructed and ‘see Zakarija’:
​And that’s it. There is no answer to what Pliny has to do with the people with the long ears. But I don’t really mind. This is the charm of the 2nd edition. Reading one entry inevitably leads on to another in the manner that ways lead on to ways for the poet Robert Frost. But I have to try to avoid falling into this trap; as I mentioned earlier, I’m attempting to read the entire Dictionary from beginning to end – I’ll never get it done if I get too distracted.
I am currently on the letter ‘D’ in my quest to read the whole of Brewer’s. But the last time I was in the Library I had a flick through to some of the later entries in order to give you a flavour of the nature of this wonderful book.
​The entry on misnomers - things that have a misleading name - is particularly long and interesting. It also shows a feisty and opinionated side to the Reverend Brewer. Here are a small number of the descriptions under the heading:
Following Ebenezer Cobham Brewer’s death in 1897, three years after the publication of the 2nd edition, there have been a further 20 editions. In addition to the old copy in the Library, I have my own modern version – the 18th edition, a birthday present from my Auntie Maisie and Uncle Dougie. 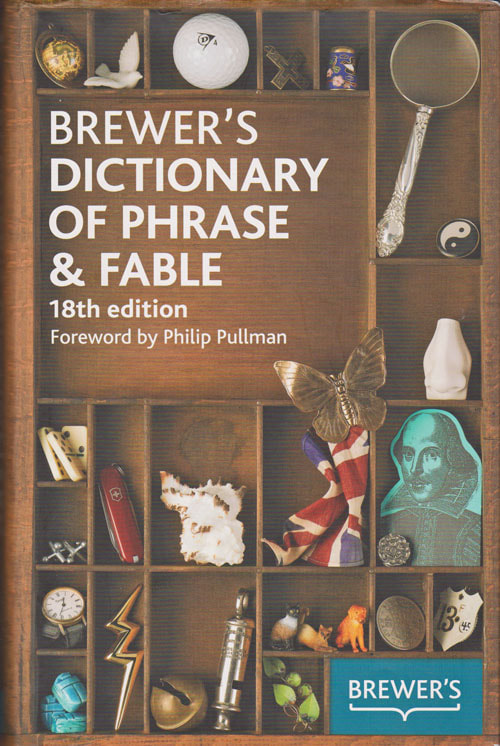 ​I like the cover of this version and I know what it is, too. It’s a Cabinet of Curiosities. I know it’s a Cabinet of Curiosities because there is a large, old country house near here called Wallington where I and Mum, Dad and Finn went for a day out. It’s an interesting place with a collection of old doll’s houses (if that’s your thing); there is also a whole room at the top of the house filled with interesting and unusual objects. This, Dad told me, is Wallington’s Cabinet of Curiosities.
Perhaps this is the best description of Brewer’s Dictionary of Phrase and Fable – it is a cabinet of curiosities.
Even though I now have my own copy of the Dictionary, the Library’s copy is still my favourite. I think this is because of the air of mystery that surrounds many of the entries.
Take this extract, for example, from the 1894 edition:
​Of the entries I’ve read so far, this is one of my favourites. It raises so many questions. Where is Congleton? How much was the Bible worth? How much did a bear cost? Why did the parish clerk want a bear? I am in the dark.
Turning now to my modern 18th edition and looking at the same entry reveals more:
​I am illuminated and I know everything (bear-baiting? Urgh). Sometimes it is not the worst thing to be in the dark; sometimes a bit of mystery is a good thing. Who doesn’t like a good mystery? Well, sometimes I do and sometimes I don’t. Sometimes I do want the full story and sometimes mystery and puzzlement is fine. That, for me, is the extra ingredient in the 2nd edition. Both volumes are fascinating but it is the earlier version that also provides a dash of mystery. So I will continue to visit the Library to spend time with the 2nd edition – my old friend. Truly, there is no other dictionary like it.
The very last word, of course, belongs to the genius that was the Reverend Ebenezer Cobham Brewer, “The labour of all this writing out and indexing has been very great, though a labour of love for me.”